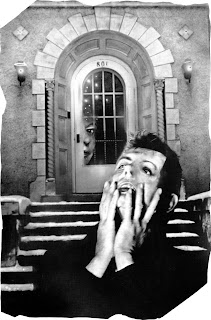 Since it first appeared in Songs of a Dead Dreamer, Thomas Ligotti's seminal debut short story collection, “The Christmas Eves of Aunt Elise: A Tale of Possession in Old Grosse Point” has quietly haunted the brains of readers stricken with holiday memories. Some people re-visit this underrated tale near late December, when fiction and existential fact can collide like two screaming locomotives, leaving behind a marvelous, chaotic debris field capable of filling real life with unusual wonderment, if only for an instant. Ligotti's apt creation and manipulation of literary atmosphere has long been one of his most admired traits. In this ultimate holiday horror sideshow, his powers are at their height, inflating the story with a hyper-atmospheric aura equal to weird fiction's other rare Yuletide classics, like H.P. Lovecraft's “The Festival.”
How does Ligotti manage this curious feat? Though a true analysis will never be able to fully quantify Aunt Elise's dark magic, her powers (and by extension, the author's) reverberate from three blazing logs responsible for firing the story's atmosphere. There is a nightmarish toying with time, an anxious glimpse provided by Ligotti at a stagnant immortality and the tragedy of growing old. This theme is carefully fortified by the liminal irreality that churns throughout the piece, bound to an omnipotent dread manifest in Christmas Eve by Aunt Elise's gaudy decorations, as well as hypnotic tendrils of disorientation, bursting from the story's rich imagery and narrative structure. Possession, however, is the chief horror on exhibit. Like other tales by Thomas Ligotti, always at their finest when they are stitched together by elaborate mysteries, “The Christmas Eves of Aunt Elise” poses a confounding question: Who or what is being possessed in Grosse Point? This inquiry is ripe for speculation, but the answer – if there is one – may yield more Ligottian fear than comfort.
Among the many bizarre elementals weaving this story's unmistakable atmosphere, time is king. Ligotti shows us the equally strange and unsettling effects of time on the march and standing still. From the outset, when readers are introduced to the perspective character Jack - an introverted lad who wishes the holiday would pass uneventfully (or fail to arrive in the first place) - and enter Aunt Elise's abode, there is clear time manipulation. Christmas Eve with Aunt Elise is an affair that flits between otherworldly horror and an authentic family gathering. Yet, the recurring carols, presents, and décor in Elise's estate, year after year, portray a quiescent immortality terrible to behold in its repetitive stagnation. Jack feels, “...the nightmarish sense of a ritual forever reenacted without hope of escape” (page 131). So do we.
There is no comfort to be found, though, in the dramatic leaps through time Ligotti makes us privy to near the story's conclusion. Jack, no longer a little boy or a twenty-something smart ass, find himself remembering Aunt Elise's Christmas Eves in an inebriated state with a new slew of relatives – a gathering that differs only subtly from past Eves. It is clear Jack has nourished a lifelong disdain of Christmas, and cannot escape the long shadow cast by Aunt Elise. Even before she makes her grand re-appearance, Ligotti ensures that the old woman's ghost is alive, particularly by fulfilling a hidden prophecy contained in Elise's nickname for the hapless protagonist: “Old Jack.” Jack may be much older since her passing, but not necessarily wiser – as if anyone could indeed wisen up to her arcane knowledge.
Through this, one thing is certain: growing old is hideous, possibly equivalent to Aunt Elise's virtually unchanging existence. Nowhere is this better illustrated than in the yarn she tells on one particular Christmas Eve. It seems an old man used to live in a grand house down the street in Grosse Pointe. After his residence is dismantled piece by piece following his death, to transport it with him to another world per his beliefs, the ghostly estate reappears one festive evening, to a young antiquarian's delight. All seems well at first, as the youth follows the friendly elder inside and explores its mysteries to his content. But events quickly take a turn for the worse when the old man disappears, leaving his visitor stranded in an outpost amid a sea of darkness outside, populated by weeping, lost figures. Peering out at this hellish sight, the antiquarian sees an old face reflected back: “...then the young man realized that this was now his own face, and like those terrible, ragged creatures lost in the fog, he too began to cry” (135). And there is plenty to cry about, especially the possibility that advanced age is a mere gateway to joining the wandering, decrepit souls outside the house.
Aunt Elise's creepy tale concerning the antiquarian is an outstanding example of the story-within-a-story that helps generate severe disorientation in this work. Ligotti reinforces this facet in the symbolic wrapping paper adorning young Jack's gift that features little bears dreaming of presents, which in turn have sleeping little boys on their paper. Seasoned readers know Thomas Ligotti is fond of depicting these multi-layered realities. The one swirling around Aunt Elise, however, is extremely dizzying. 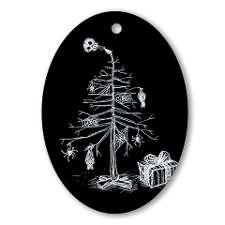 Displacing solid realities and environments is similarly conducted with rich, often contrasting imagery. Grosse Pointe's mundane, antique environs are upset by obscene lights and festive decorations. This lends the story's backdrop an unfamiliar atmosphere, as when Jack observes, “...a serene congregation of colors that for a time turned our everyday world into one where mysteries abounded” (130). It is this invasion by Christmas warpaint that mirrors the warping of Jack's environment and mind, and possibly even causes it. Outside the luminescent living rooms and halls is a darkened world where fog rolls off nearby lakes. Ligotti's juxtaposition of vibrant inner chambers with outer deadness successfully makes a heavily mysterious atmosphere, but also brings to the surface another important shadow within the story: a supremely transitory world, where anything and everything might happen.
Christmas Eve itself is a threshold between two realms, the uneventfully normal and the holiday. This, combined with weirdly leveled storytelling and supernatural occurrences, is exploited by Ligotti to make everything in this story appear restless and translucent, a liminal irreality where nothing is certain, except the sensation that something dreadful is going to happen. This decoupling of certainty opens the way for possession by Aunt Elise, representing a holiday spirit whose touch brings chills instead of cheers.
By the time the icy climax arrives, when Old Jack returns to a house he had thought forever vanished, and an Aunt he believed long dead, the matriarchal Elise's role as demon appears iron clad. “Oh, how nice, how nice and lovely to be settled in a world where it's always dead with darkness and always alive with lights!” (137), the old creature cackles, as she captures Jack's collected memories. Perhaps she actually functions more like a vampire than a demon, in the end.
Although concluding that Aunt Elise is the possessive maestro behind the horror, Jack's puppet master, and a malevolent holiday entity is the most popular and likely explanation, there is a different angle worth exploring. In Ligotti's work, little is what it seems, and labyrinthine passages to meaning abound. “The Christmas Eves of Aunt Elise” lacks a blatant reference to unseen forces, maniacally wrestling actors from behind the curtain, such as the existential blackness in his later tales, or the Great Chemists in “The Chymist.” Still, there seems to be a nameless force greater than Jack, Aunt Elise, or Grosse Pointe, beneath the uncanny holiday glamor, possessing all of these people and places.
What could it be? This power might best be described as an embodiment of the holiday season, a blind and groping, but real “Christmas Spirit.” Again, the idea of an endless “ritual forever reenacted without hope of escape” springs to mind. Now, imagine the ritual as an occultic rite that summons and sustains a terror more abstract than Aunt Elise. Though difficult to describe, it is easier to see this black holiday spirit's effects.
Christmastime's onset means a complete takeover of Grosse Pointe, the overwhelmingly rich infestation of decorations, guests, and lights in a sleepy suburb that wishes it could stay dreaming. In fact, the rolling fog, aside from its use as an atmospheric component, seems so much like an effort to quarantine the Christmas disease. This is not unlike Jack's reaction to Christmas – one of repulsion, as the holiday threatens all of his natural inclinations toward solitude and quiet. By the story's end, Jack rightly appears to be unwitting prey to Aunt Elise's omniscient machinations, just as the antiquarian falls to the mysterious old homeowner. But then, Aunt Elise and the old man apparently know what is going to happen to their victims and themselves. Their actions feel scripted as they dance to fate's command, so much like supernatural puppets plucking their lesser dolls' strings. In this way, Aunt Elise and her elderly neighbor act more like masks for a nameless force – possessed by an eternal Christmas spirit, just like Jack and Grosse Pointe's affluent homes – rather than demons or vampires with free will.
Thomas Ligotti discusses the surreal and frightening effects of determinism at length in his latest book, The Conspiracy Against the Human Race. Regardless of whether or not there is a deterministic spirit behind Aunt Elise's bewitching motives, the possession occurring in Old Grosse Pointe seems awfully familiar. The town, in fact, could be any, and Jack anyone with a slightly misanthropic streak, who dreads the arrival of candy canes, glittering trees, and family gatherings enacted by duty, not pleasure. By painting an all too common occasion in truly weird atmospheric hues, Ligotti has delivered a resonate tale of holiday horror that will surely gain recognition over coming Christmas Eves. Or, has he exquisitely described, not invented, a ghastly side to a holiday whose bright exterior has always hidden a greater blackness?
Works Cited
Ligotti, Thomas. Songs of a Dead Dreamer. Burton, Michigan: Subterranean Press, 2010 (1986).
-Grim Blogger
Grim Blogger at 7:00 AM
Share
‹
›
Home
View web version